Posted on September 8, 2015 by whofkirchner

The latest issue of Information Today features highlights of our Summit such as the unpacking of Shannon’s wrongly labeled “Information Theory” (Terrence W. Deacon, UC Berkeley, and Yixin Zhong, Beijing University of Posts and Telecommunications), new frontiers of the science of information (Wojciech Szpankowski, Purdue University) or Jus Algoritmi – how the NSA’s PRISM programme (which was revealed by Snowden) determines the citizenship of an intercepted communication in order to comply with legal surveillance.

Emil Levine, the author of the feature, press observer of the Summit, is an American library and information science consultant living in Vienna.

“Finding an information concept suited for a universal theory of information” is the title of Brier’s most recent article in which he lays out his cybersemiotic approach in Elsevier’s Journal “Progress in Biophysics & Molecular Biology” (publication year 2015). Brier is Vice-President of ISIS for Research.

Günther Witzany in Huffington Post: Modern Synthesis must be replaced 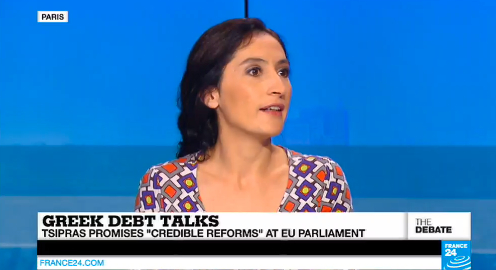 Zoe Lefkofridi, Joint Jean Monnet – Max Weber Fellow at the European University Institute, invited speaker at our Summit on the economization of the political project of a European Union, was invited to “The Debate” on FRANCE24 TV station on 9 July 2015.

Among the participants was economist James K. Galbraith, son of John K. Galbraith. He co-authors books with Yanis Varoufakis. He was connected by videoconferencing from the USA.

Zoe is pointing at the consequences of a birth defect of the EU. It started as a region in economic terms, while the political integration has remained an issue quite underexposed. Jürgen Habermas writes that the crux of the problem is that politicians in Brussels and Berlin refuse to encounter their colleagues from Athens as politicians. They look like politicians but speak only in their economic role of creditors. The purpose of this transformation into “Zombies” – Habermas’ own words – is to make the protracted insolvency of a state appear as a non-political issue, an issue to be disputed before the courts under private law (http://www.sueddeutsche.de/wirtschaft/europa-sand-im-getriebe-1.2532119). Whereas the sociologists of the 60s and 70s talked about “state-embedded markets”, the neoliberal paradigm conjures up “market-embedded states” (so Hauke Brunkhorst in: Weil Europa sich ändern muss, Springer 2015). Democracy has to conform to the markets, as Angela Merkel put it, and not the other way round. This dogma has proven conducive to a reanimation of nationhood within the EU, as Gesine Schwan, presidential candidate of the SPD in 2004 and 2009, concluded in an interview (https://www.freitag.de/autoren/jan-pfaff/politik-wird-durch-zwang-ersetzt).

In the showdown around the Memorandum with Greece the German government has demonstrated its ugly face. Economist Paul Krugman calls it a “coup” (http://krugman.blogs.nytimes.com/2015/07/12/killing-the-european-project/?_r=0) and he is in good company: other Nobel prize winners such as Joseph Stiglitz or Amartya Sen share the assessment that the dictate of austerity is counterproductive to economic growth and democracy.

If social information processes are distorted to such a degree that essential issues easy to understand can’t be resolved in a co-operative manner, the collective intelligence is not mature enough to usher in an information society worth its name. And the question is: Is another Europe still possible?

Parts of our concert can be viewed and listened to at youtube. Use that link for the English version and that for the Russian one. 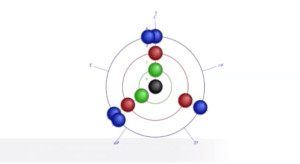 That video contains miniatures and an etude of genetic musical tunings by Ivan Soshinsky. These works are based on research done at the Russian Academy of Sciences and the “Center for Interdisciplinary Studies of Musical Creativity” of the Moscow P. I. Tchaikovsky Conservatory.

The concert was held in co-operation with the University of Music and Performing Arts Vienna (mdw).

If you want to know more about Genetic Music, read the papers of Sergey Petoukhov, Laureate of the USSR State Price and listed by the Chinese Government as “Outstanding Scientist of the World”, and affiliates and view their presentations at the Summit: Music and the Modeling Approach to Genetic Systems of Biological Resonances | The Genetic Code, the Golden Section and Genetic Music.

Now we can announce that those abstracts that fulfilled the criteria for publication have been published. All of them have been assigned a Digital Object Identifier (DOI).

A radio feature. In: matrix – computer & neue Medien, oe1, ORF, Sunday, 21 June, 2015. Currently available at http://oe1.orf.at/programm/407404. (When expired, go to our site on Articles and reports.) With interviewees Christian Fuchs und Rafael Capurro, both part of the Summit.

New issue of Cybernetics and Human Knowing published. Vol. 22, No.1, 2015 contains among others a discussion of Kun Wu’s philosophy of information co-authored by Liqian Zhou and Søren Brier and an article on machine knowing by Joseph Brenner – all of the authors having been active at our Summit. Follow that link. 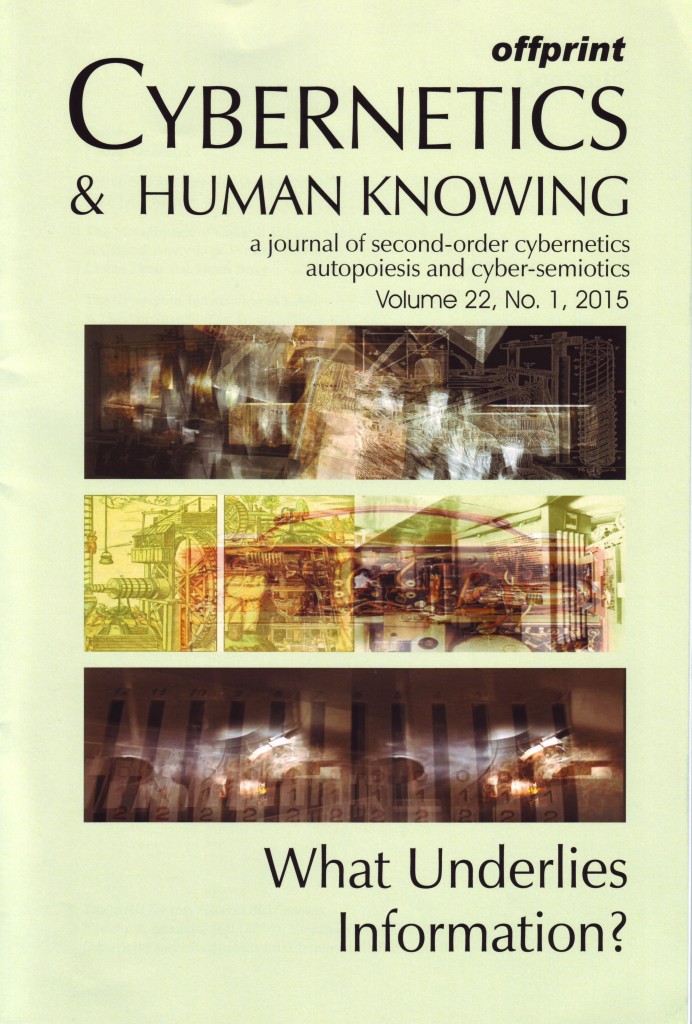 If you attended the Summit and held a presentation, and if you do not only want your abstract being published but also your presentation, just send a mail to rordorf@mdpi.com, refer to your manuscript number “sciforum-00….” and attach a pdf of your presentation. Dietrich Rordorf from the MDPI will be so kind to upload it. 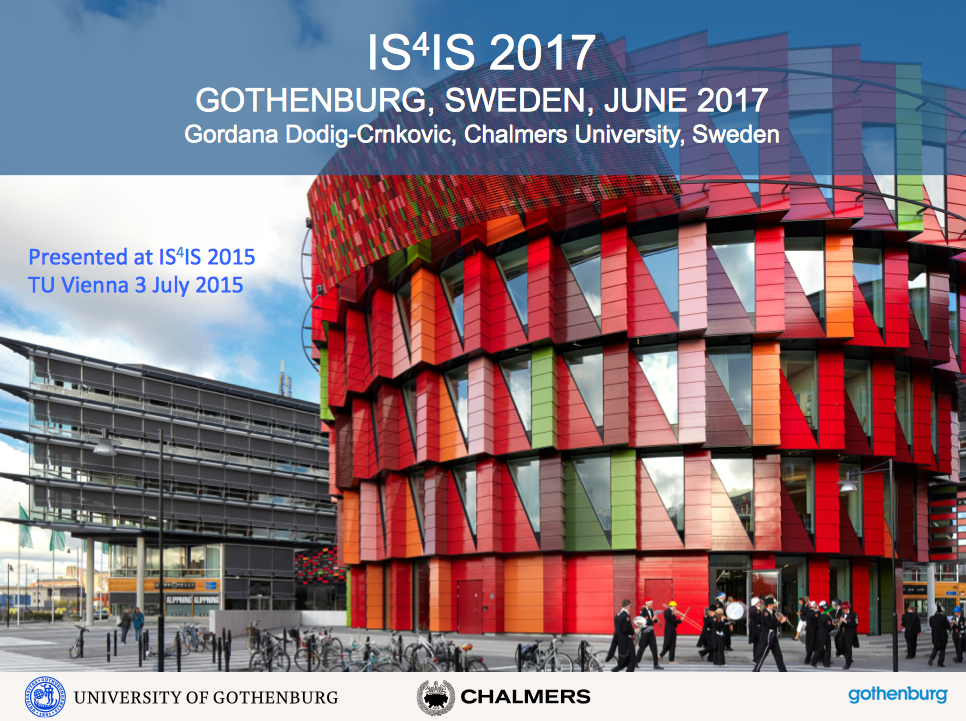 The next Summit will be held in Gothenburg, Sweden, in 2 years from now. New ISIS President, Gordana Dodig-Crnkovic, will chair it.

Click on the picture to see Gordana’s presentation of the next venue.

See below the promotion video “This is Gothenburg”.