There will be different locations – four in Vienna for the first four days and another one, floating on the Danube river in Lower Austria, for the last day. 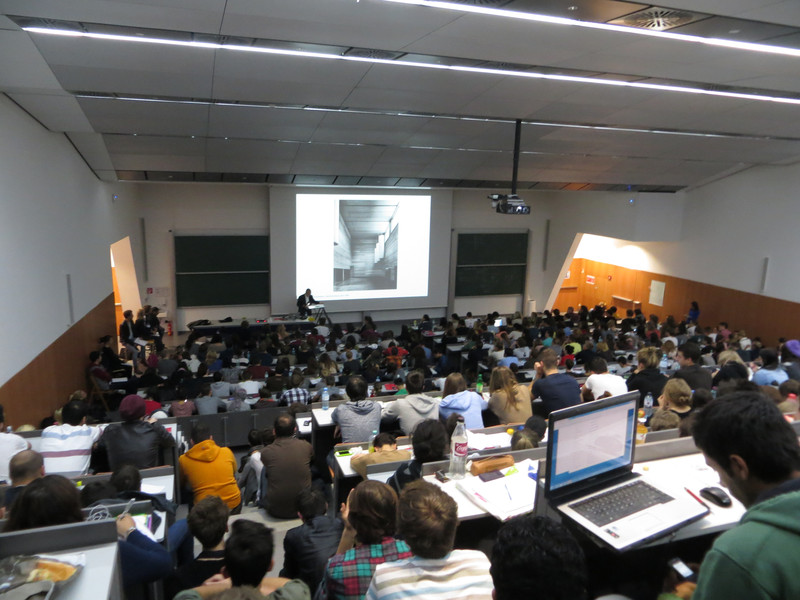 The opening day of the Summit will be held in a “green building” – in a recently opened reconstructed tower which claims to be the first office tower of the world that produces more surplus energy than energy needed for operation and use.

Read more about the building.

The plus-energy tower is part of the Getreidemarkt campus (see buildings in green top left on the map below).

The Audimax is the largest hall of TU Wien. It has a capacity of over 500 people. In the course of the reconstruction of the tower, the old Audimax (that had the double capacity) was reconstructed too. It is situated in the ground floor and floor -1 of the tower and can be entered from inside the tower or directly from the street. 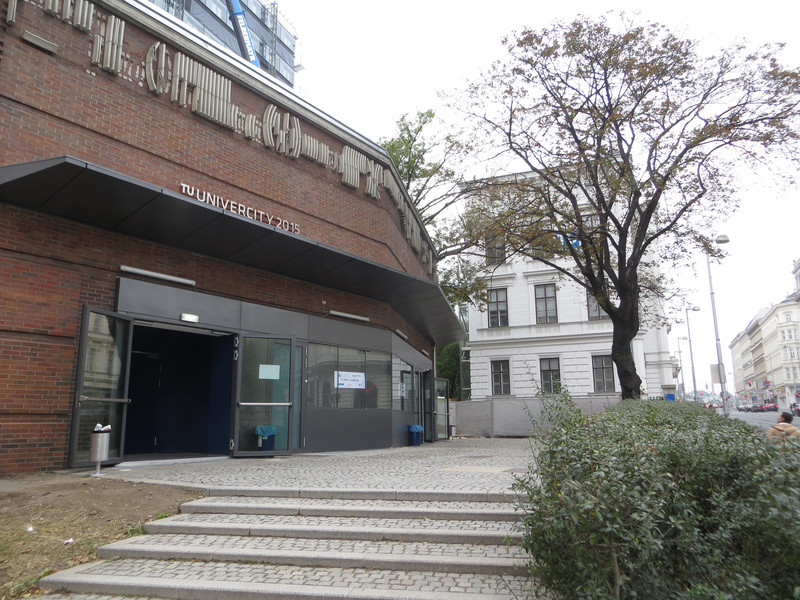 The entrance of the Audimax from the street (Getreidemarkt) (all photos: TU Wien)

Load down the map of the Audimax. See the location overview below.

The eve reception on day one will be held in the Aula of the Freihaus (read below). 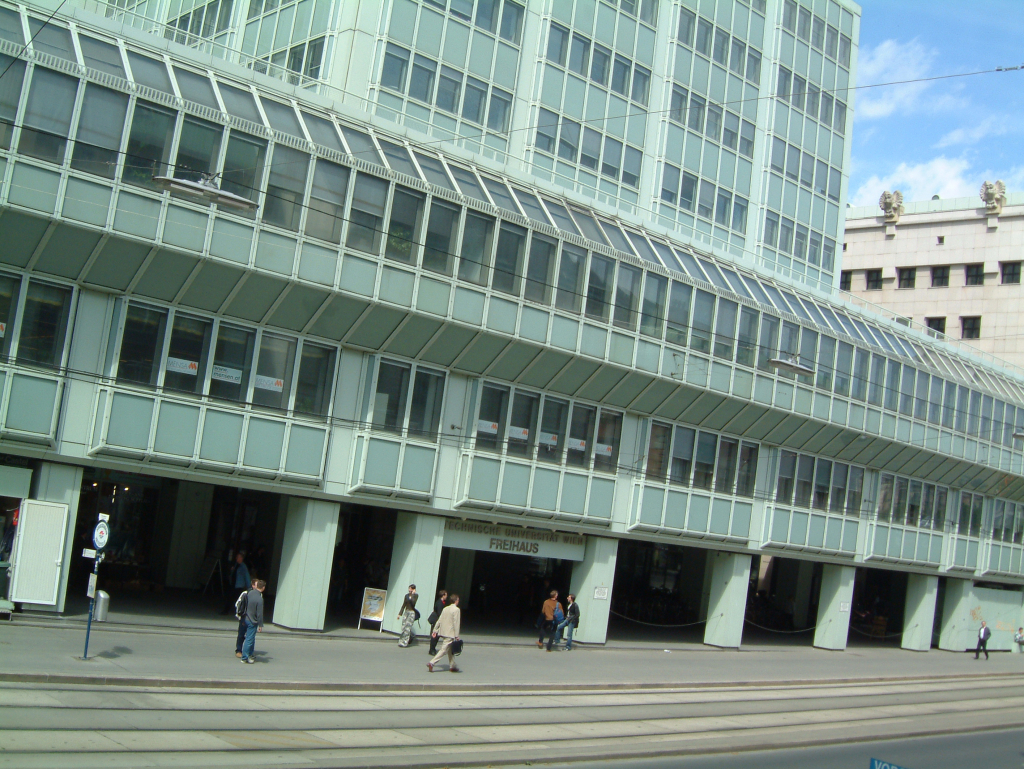 Freihaus entry at Wiedner Hauptstraße. The building in white in the background is the library of TU Wien located to the north of the Freihaus.

The term “Freihaus” denoted a free house, that is a kind of extraterritorial building within the confines of a medieval or early modern city. The house in question was located in Wieden in the suburbs of Vienna in the late 18th century and formed part of a large complex belonging to the Starhemberg family. It was a theater – Freihaus-Theater auf der Wieden – and the venue of the premiere of Mozart’s “Zauberflöte” (“Magic Flute”). In the Seventies of the last century, the remaining building was replaced by the new building in the colour of green copper to suit the cityscape and resemble the roofs of Hofburg and Karlskirche. 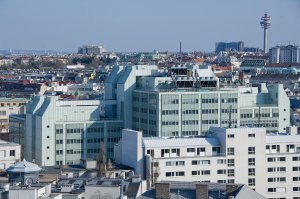 Today it houses several institutes of the TU including labs in Physics and Mathematics, the representation of the TU students, the TU central information service, the TU mensa, the TU graphical centre, and, of course, lecture halls and seminar rooms. 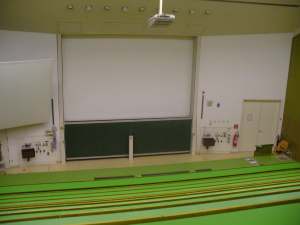 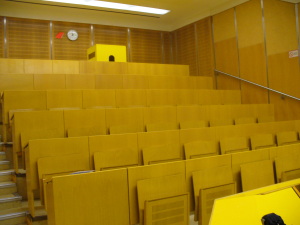 On day one registered participants will be invited to a reception in the so-called Aula, the open space on the 2nd floor, starting at 20:00.

A computer music concert will be given on day two at 20:00 in the Festsaal of TU Wien in the main building, second floor. 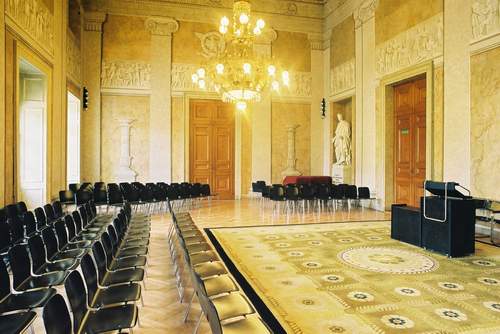 Load down the map of the Festsaal. See the location overview below.

The Computer Art Exhibition “ICT and literature” will start on 5 June, 2015, at 20:00 in the DS Lab that is kindly provided by the Distributed Systems Group of the Institut für Informationssysteme, Faculty of Informatics. It is located in the basement of the location Argentinierstraße. Entrance is from Paniglgasse.

The General Assembly of ISIS is scheduled for 6 June, 2015, at 20:00 at the same venue in the Seminar Room (ground floor). The Seminar Room is accessible from Paniglgasse too. 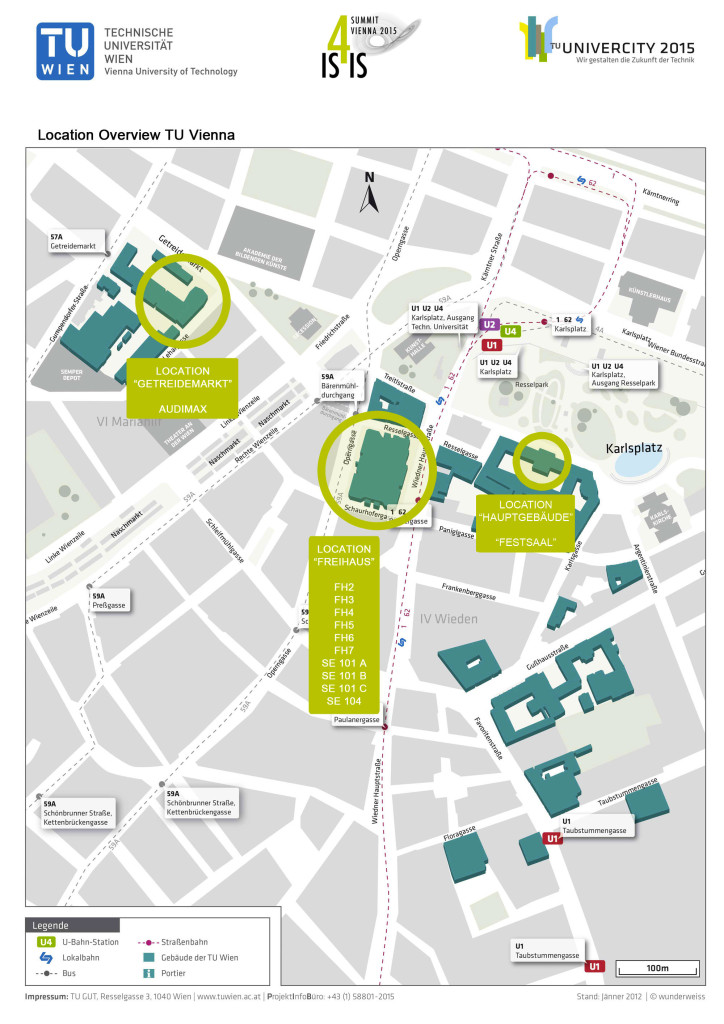 The historic Main Building (“Hauptgebäude”) is south of Karlsplatz, a square with parks. The Karlsplatz is located at the southern edge of the Centre (first district of Vienna). The Centre is in walking distance.

There is a tram stop in front of the Freihaus (see photo). But you might take one of three metro lines to Karlsplatz and then just walk out of the station to the south or walk from your hotel if in walking distance (see list of hotels).

How to arrive at Karlsplatz.

The Vienna University of Technology – TU Wien (TUW) – is located in the heart of Europe, in a cosmopolitan city of great cultural diversity. For nearly 200 years, the TU Wien has been a place of research, teaching and learning in the service of progress. The TU Wien is among the most successful technical universities in Europe and is Austria’s largest scientific-technical research and educational institution.

Location of the Floating Summit, 7 June 2015 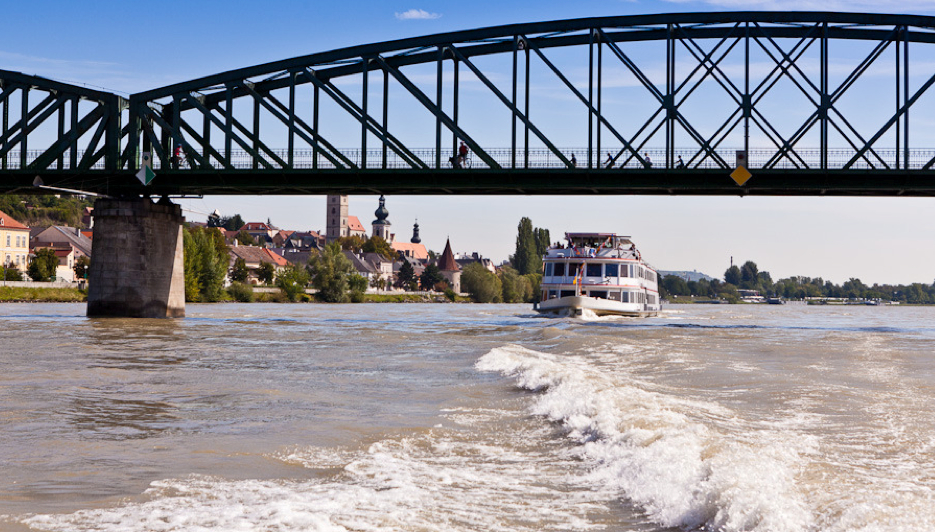 Details of the ship.

Take metro U1 from Karlsplatz to the north to stop “Vorgartenstraße” and then the sidewalk of the bridge. After crossing the railway parallel to the river bank go right. About 10 minutes. (If you come from the north, get out of U1 at stop “Donauinsel”, take the sidewalk, cross New Danube and Danube. At the right river bank turn left. About 12 minutes.)

For orientation see that link.

After departure (8:30) the ship goes upstream through Lower Austria, another county of Austria, passing two locks at Greifenstein and Altenwörth. We pass Krems and enter Wachau, a rather narrow, meandering stream valley, famous for apricots and grapes. We debark at Dürnstein (14:30).

The town Dürnstein is named after the original name “Dürrstein” (which means “dry stone”) of the castle above the town, in which Richard the Lionheart was held captive from 1192 to 1193 (photo: DDSG)

The conference programme is continued with a visit of the excavation site Willendorf II and a lecture on new findings. This site gives evidence of the oldest traces of modern humans in Europe. 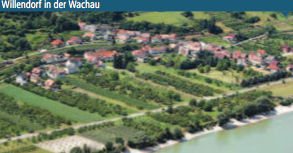 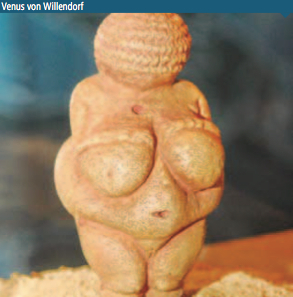 Willendorf I is well known for its Venus dating back to the Paleolithic Period around 25.000 years BCE (photo: DDSG)

After boarding in Dürnstein (17:30) the closing session of the Summit takes place. We take the same way back to Vienna/Reichsbrücke (arrival at 22:30).

The evening is concluded by the social dinner on board.

Other Places Worth Visiting